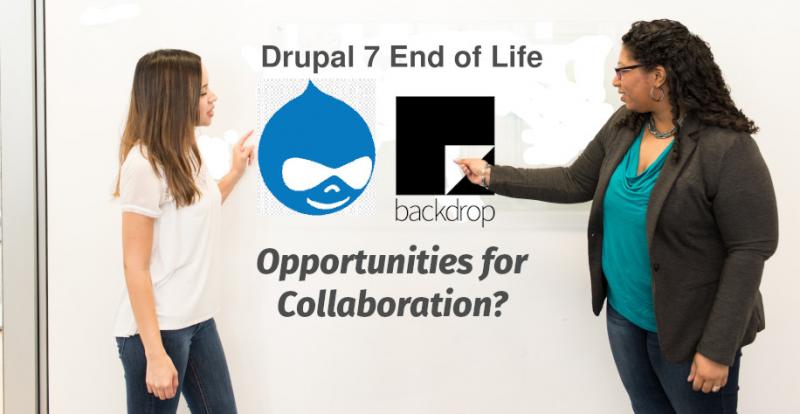 My primary goal in writing this post is not to limit discussion to any single vision for the future, but to provide one potential vision that might help stimulate additional thought, discussion, and possibilities.

At the most recent Backdrop LIVE we engaged in a healthy and robust discussion on the topic of “Should Backdrop CMS be Drupal Classic?” The title was meant to be a little provocative (to draw attention to the conversation).

If literal accuracy were the only goal in titling the discussion, I would have suggested “What are the Opportunities for the Backdrop CMS Community to Collaborate with the Drupal Community to Ensure a Soft Landing for Drupal 7 Site Owners.” That's a mouthful.

Do we have sufficient shared interests to make any kind of collaboration possible or is this a zero sum game, where every Drupal site that moves to Backdrop is a loss for Drupal and vice versa, with both camps losing as Drupal 7 sites disappear or move to WIX, Squarespace and Wordpress.

In theory, Backdrop does not need to attract Drupal 7 site owners to grow and thrive. Our CMS is a solid CMS solution built upon a strong Drupal foundation and should be able to stand on its own, attracting new users from lots of different places. In theory, Drupal 9/10 should be the obvious upgrade choice for every Drupal 7 site and Drupal usage should be expanding, not shrinking. However, neither of these things are true. The Backdrop CMS community is growing much slower than we would like to be and the Drupal community is losing users every day to such tools as Wordpress and WIX.

No, I don’t think that we should rename or rebrand Backdrop CMS to Drupal Classic nor do I think that we can or should be looking at reintegration with the larger Drupal project. But, I strongly believe that there are opportunities for increased collaboration and cooperation. While I don’t want to rule out any possibilities, I suspect that collaboration might be dependent upon a couple of assumptions.

In my opinion, the primary blockers towards this kind of collaboration are probably the following two factors:

While either, neither, or both of these perceptions might be true, I’m not yet convinced that either are. While the Backdrop CMS community is significantly smaller than Drupal, I think we have important resources, assets, institutional knowledge, energy, and most importantly our focus on smaller sites that would be beneficial to a potential partnership or relationship. Drupal brings its size, history and resources to the table.

Fundamentally, I think this can work, because as a long time contributor to both communities, I believe that we share an interest in meeting the long term needs of the small businesses and nonprofits upon which the Drupal community/platform was originally built. While many Backdrop community members are angry and frustrated at previous Drupal decisions that left them feeling ignored or neglected, I personally don’t believe that this was intentional and that through collaboration we can try to fix or improve upon some of the errors or miscalculations of the past.